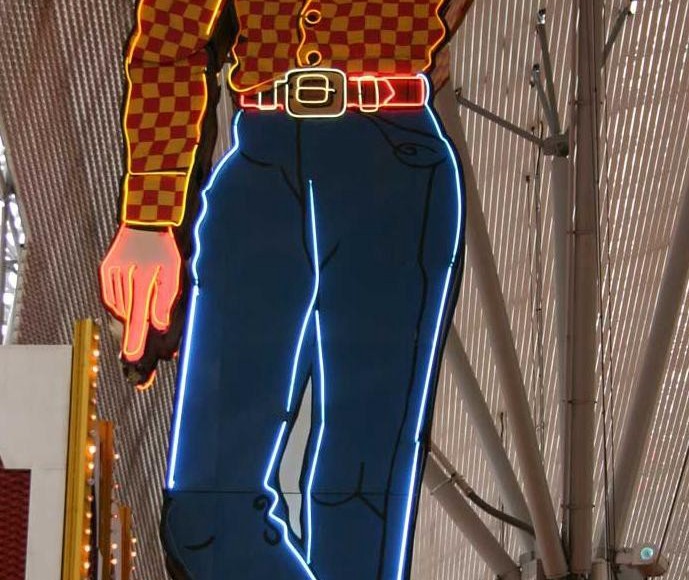 I watch at first with detached bemusement as if my New York City tastes are better than this. But soon I am giddy with childlike wonderment. What’s not to love in this bacchanal of lights, music, and gaudiness? In the absence of authentic culture Vegas has developed its own reactionary culture: schticky, excessive carbon-fueled capitalism. No requirements needed, besides a few thousand dollars, a lust for gambling, food, drinking, shows, over-the-top spectacle, and Disneyfied versions of world landmarks like Venice gondolas and Roman palaces. It is beautiful in its recklessness, in its complete lack of self-awareness. And as much I want to resist, Vegas has gotten a hold of me, the way a gust of wind gets a hold of a dandelion seed that floats in reverie. I bow to the altar of its excess, its garish, glittering neon lights shimmering and shimmering. I am in awe. I am in dream. I am in love.

But there is a duality to my thoughts, an equal and opposite feeling to my excitement. My solastalgia, a form of existential grief over the environment and climate change, returns. Underneath my awe, I am awash with guilt. I do not belong here. This does not belong here. I know nothing about Vegas and our civilization is sustainable. That I am not looking at a live, thriving city but one that is already dead, too in love with its reflection to notice. That unless something is done right now about the climate emergency, our world will burn out the way a comet disintegrates as it enters the atmosphere as if it never existed.

I am here in Vegas because I’m a shitty environmentalist. I am aware that one flight to Vegas from New York emits 20% of my greenhouse emissions for a year, yet I came anyway, unable to say no to a free vacation with my partner’s family. I am a vegetarian too for climate reasons but cheat a few times because on vacation I am unable to succumb to temptation. I fail at all that I wish I was but cannot possibly live up to. I want to be better because I feel constant anxiety about the planet, but I am not, and there is never a moment where I am not fully aware of my sins. This guilt eats at me, hollows me out with heaviness, leaves me unable to fully enjoy my holiday.

But I try. I spend most days poolside, reading books, swimming or drawing the ostentatious pool fountain repeatedly. I leave my phone in my room, which helps my anxiety, and my urge to check my twitter feed for climate news lessens. For hours at a time, my guilt lessens, and I relax into an easy truce between consumption and fear.

But there are reminders of the horrors of the world. One day I spot two white men wearing MAGA hats by the Bellagio poolside. They wear the same costume, muscled men with military tattoos, facial hair, and aviators sunglasses. I’ve never seen anyone wear a MAGA hat in New York, but Vegas is a middle America destination, and I am aware of my brownness in a way that I never am in New York. It unsettles me, and I decide to go back to my room.

At nights, I have dinner with my partner’s family at restaurants on the strip. One night we dine at Lakeside, a seafood restaurant inside the Wynn Hotel. The setting is immaculate with a view of the Wynn’s Lake of Dreams where a 40-foot waterfall spills out into a massive lake that lights up every half-hour to a musical soundtrack for the dinner guests.

The Lakeside’s menu is small but luxurious. Shellfish dominates the menu. But Filet Mignon or Ribeyes can be had also for just over $70 a slab. One section reads, Hawaiian Day Boat. I check the website out of curiosity: do they really bring the fish in from Hawaii? On the Lakeside landing page, it reads, “Lakeside at Wynn serves Hawaiian seafood, line-caught by family fishermen in Hana, flown to Wynn and served fresher than even restaurants in Maui.”

This sentence triggers my anxiety. My thoughts turn into a spiral of madness. I begin to ruminate, acutely aware of what it takes to run this restaurant every day. I imagine the airplanes and trucks bringing fish from Hawaii, lobster from Maine, wine from Napa, Italy, Bordeaux, and New Zealand. I think about the number of visitors to Las Vegas every year, somewhere in the neighborhood of 42 million a year, and I consider all the plane flights and driving it takes to get here, the amount of carbon being pumped into the atmosphere to spend a few days here to see washed-up pop stars like Britney and Boyz II Men. And I consider all the lights of Las Vegas casinos, famous for never turning off, and I consider this hotel, and how the air conditioning, the lights and the slot machines are all on 24 hours a day, burning and burning more and more carbon into the atmosphere. And I remember the number of plastic water bottles everyone drinks here, and I remember that plastics are made with oil, and that plastic water bottles take 2000 times more energy than tap water. I hesitate for a second because I remember that the hotels recycle their plastic, but then I remember that almost all plastic in America is actually not recycled but burned.

I breathe deeply, trying to calm the feeling of panic that has overcome me. My dinner guests don’t know it, but I am in despair, overcome again with Solastalgia. But I say nothing. My politeness gets the better of me. Bringing up the amount we’re consuming in Vegas doesn’t strike me as an amiable conversation. All I do is sip my wine, eat lobster, and sulk.

One day I leave the Strip and head to Fremont Street, the center of legendary downtown Las Vegas. My cab driver, a colorful man who looks like a skinnier George RR Martin and listens to a Dodgers game on the radio, tells me about his early days in Vegas when he would do coke every night and party with the mob.

When I arrive on Fremont Street, I am taken aback. It is kitschy as hell. It has none of the high-priced shops or glitz of the Strip. It resembles the romantic notions I once had of Vegas picked up from so many movies and TV shows, the kind of place where you could buy cocaine at noon if you knew the right people, a place where the casino staff all look hungover but will regale you with legendary stories of nights out, a place where beers were 3 bucks, not the place it has become, The Strip, a place where you can blow $3000 on a meal and buy $1200 Balenciaga boots. I love it, of course. I love watching the people wander and dance, beers in hand in the 110-degree heat. Loud electronic music blasts everywhere, loud enough to drown out my anxieties, my senses overwhelmed by the joyful absurdity.

Staring up, I see Vegas Vic, the massive neon Cowboy sign, which soars to the top of the enclosed roof of Fremont Street,. Vic winks at me as he smokes a cigarette and points at himself with his left thumb. Vegas Vic is an icon I recognize but from God knows what. He is just one of those cultural symbols that have permeated the collective unconscious, recognizable but no longer famous, shown in the background of thousands of tv shows and movies. He feels like a cipher of sorts, but I’m not sure what he encodes. But at that moment Vic may have been a field of Lilies in spring or sunrise at 6 am on Oahu: I am struck by his resplendent beauty. I am still dispirited, lacking hope about the climate and the future. But standing here, staring at Vic, I am able to be present.

In Zen Buddhism, there is a notion called “Goalless Practice.” It is the notion that seeking a goal in meditation is exactly the kind of striving meditation is aiming to avoid. The only way to find peace in meditation and in life is to let go of any notion of achievement. A form of zen meditation called “Shikantaza,” is sometimes described as “just sitting” with no notion of goals or striving that is so endemic to Western life. I think about that now as I stare at Vic, and it occurs to me why he feels like a cipher.

Vic tells me to let go into uncertainty, to let go of control, to let go of the notion that I can do anything. I cannot be perfect about the climate. I can never live up to Greta Thunberg. And even if I never drive a car, stop flying or never eat meat again, and so does everyone I know, it will do nothing to stop the climate emergency. Individual action isn’t enough. My guilty consumption is ultimately misplaced. Global warming cannot be stopped unless everything about the way our species lives has changed.

But I know that is unlikely. I know that we are probably doomed, that this civilization is already dead. I know that the world will surely warm to 2 degrees Celsius and more because emissions continue to go up despite the efforts of thousands of activists. And I realize that means vast suffering: famines, hurricanes, large cities flooded, the death of all Coral Reef and the extinction of thousands of animal and plant species.

But I understand now that leaves no room for fatalism. Even if we are doomed, I know the difference between 2 degrees of warming versus 3 degrees is massive and will greatly reduce the potential suffering. And this means all of us have to join the fight to stop burning carbon. Otherwise, we will not make it as a species.

As I stare up at Vic, I feel calm. For the first time in weeks, I feel sane and at peace. And it fills me with the kind of hope only the hopeless can understand.